1951 Article About A Wedding

An article by Alfredo Correoso Quesada with the headline “Mariana Martínez Rodríguez” appeared in the Sunday, June 10, 1951 issue of El Camagüeyano, Camagüey’s daily paper.  The photograph to the left accompanied the article. Here is the translation to English.

Yesterday in the morning, before a select audience that gathered in the handsome temple of the Piarist Fathers — the Church of the Sacred Heart — there took place the marriage of the charming young lady Mariana Martinez Rodriguez to the young gentleman and talented physician, Dr. Benito Prats Respall.

For the ceremony the church was adorned in sober elegance. Miss Martinez Rodriguez made a very beautiful bride, dressed in an exquisite duchesse satin wedding dress trimmed in Venetian lace. Complementing the dress is a Brussels lace veil and heirloom jewelry used in previous Rodriguez Casas family marriages.

The bouquet she is holding, custom ordered from the Milagros Gardens in Havana, is created from imported white carnations and white orchids.

To officiate this ceremony the Archbishop of Santiago de Cuba, The Right Reverend Doctor Enrique Perez Serantes, traveled to Camaguey.

After the nuptial benediction, the Veiling Ceremony Mass was celebrated.

The matron of honor and best man for the nuptials were Mrs. Eduvigis Respall de Prats, mother of the groom, and Dr. Joaquin Ventura Martinez, father of the bride.

For best man and matron of honor for the Mass of the Veils stood his father, Mr. José Prats Amat, and her mother, Mrs. Elia Rodriguez de Martinez.

Our best wishes for Mariana and Benito as we heartily repeat the saying that, in a home that is open to life you will find complete happiness.

Below are photographs from the wedding album, captioned as best as possible after the passage of time. 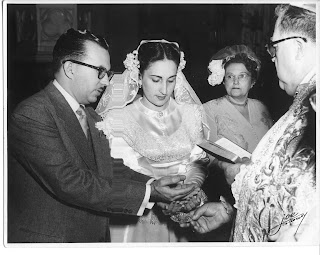 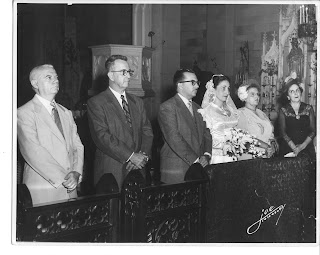 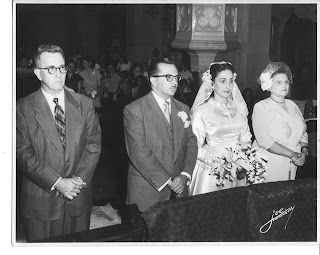