Ventura Martínez y Martínez met his wife, Elia Rodríguez Casas, at the Camaguey Tennis Club. They were married in 1925. Ventura was instrumental in its founding and his spinster aunts were honorary members of the club, in charge of sweets and pastries at functions in its early days. Elia’s sister Celita Rodríguez Casas was president of the club between 1926 and 1931. This is the story of “The Tennis.”

In 1917 in Camaguey a group of twenty-something tennis players got the idea of starting a tennis club. This was the first generation to come of age in the peace that followed the long and bloody wars against Spain that freed Cuba from colonial rule. Camaguey was booming. The population of the city would more than triple between 1907 and 1928. Until 1902 Camaguey was an isolated provincial capital 45 miles from the sea and more than 340 miles and three and a half difficult travel days away from the capital of the country. That year the Cuba Railroad was completed, reducing the trip west to Havana to a comfortable 15 hours. The trip east to Santiago de Cuba and the U.S. Naval Base in Guantanamo was likewise improved.

Camaguey’s economy grew significantly after the railroad arrived due to industry it enabled and due to the fact that the railroad was headquartered in Camaguey. A large amount of capital flowed through Camaguey, as evidenced by the opening of foreign bank branches lead by the Royal Bank of Canada. With better access to domestic and foreign markets the numerous cattle ranches and sugar plantations in the region expanded significantly. A growing economy attracted professionals, many fresh from university. These young professionals—along with young adults from families of the landed gentry and the growing upper middle class—embraced tennis, the elegant sport that was sweeping the globe at the time.

In Camaguey it was mostly young women who took up the sport initially. They would meet at the only public court in the city at the Casino Campestre Park to pair off and play. This was a cement court in poor repair, and there was no hope that better facilities would be forthcoming. “Why don’t we build a tennis club with proper courts and a clubhouse,” suggested Pilar Garces, “owned and operated exclusively by women.”

Approximately forty young ladies incorporated The Camaguey Tennis Club early in 1919. It was named in English; tennis, after all, was an English sport. Two young gentlemen, Felipe Pichardo and Ventura Martinez — both lawyers who had just graduated from the University of Havana — were instrumental in assisting the women in setting up the Club. Excellent tennis players both, they drafted the bylaws, drew up leases, obtained permits, navigated the city’s bureaucracy, guaranteed loans — and also cleared brush, hauled bricks, sand, and furniture, mixed cement, and tended to the club’s workhorse. 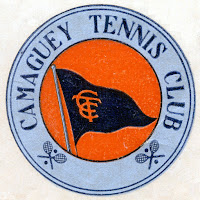 When the club opened in 1919, 106 ladies joined as founding members. And when “the Tennis” — the name everyone in Camaguey used for the club — celebrated its twenty-fifth anniversary it was already one of the premier institutions in Cuba, receiving distinguished guests from all over the world, hosting championships and fielding players in tournaments throughout the country and abroad. Its women-only membership policy was unique.

Men held guest-member status and paid no dues. They could be expelled at any time for any reason and without recourse. By 1944, the Tennis had grown into a significant philanthropic and cultural institution for Camaguey and vicinity. Its directors and officers were continually refreshed with up-and-coming young members and the Tennis continued serving its growing list of members and the community at large until the Great Cuban Exodus that began in 1960.

Felipe Pichardo — by then a well-known poet, writer, and orator — gave a speech on the history of The Camaguey Tennis Club Friday evening, January 28, 1944 at the Club. That speech is reprinted here in its original Spanish with a full English translation.


Two stories Felipe Pichardo told that evening were the story of the club’s horse, and of Ventura meeting Elia.


“But it is necessary to say more of Ventura. He was, in one person, the administrator, foreman, laborer, tennis player and dialogue prompter at the talent shows. And he also played the part of the veterinarian since he was the keeper of the Tennis’ horse.

“The Tennis’ horse! We would be ingrates if we did not dedicate a reminisce to the horse. I don’t know were he came from; I don’t know from what animal asylum that sack of bones came from. We used him to pull a primitive roller that was used to pack down the court, which the tennis players themselves would then mark with the ritual lines. But the tragic thing about the horse was not his poor figure, but his terrible ailment. He had an ancient wound in his neck that never closed, and from it dribbled out the water he drank. It was here on the Club’s grounds that Ventura kept vigil over the horse with a brother’s love.

”It was here on the Club’s grounds that, later, Ventura met the beautiful adolescent Elia Rodriguez Casas, when she had returned from the school where she had finished her studies. In short order Ventura found himself without ventura (happiness) — in other words, heartbroken — until he finally convinced her to be his noble wife.

“Ventura’s labors for the benefit of the Camaguey Tennis Club were prodigious, and won’t be forgotten by this audience.
In addition, he was a strong and unflappable player of the fine sport, and inseparable partner of Salome Zayas Bazan. They formed a pair that would have been unbeatable, if it wasn’t for another pair, Aurelia Garces — elegant in tennis without many equals — and me. ... Obviously.”