This was Benito and Mariana’s song. Benito H. Prats would play it from memory on the piano and his wife Mariana Martínez — Mariana M. Prats when they got to Maryland — would stop what she was doing and sing it. If someone else was playing it they might dance to it. It is a waltz.

Drop down to the fifth paragraph and start the audio file you'll find there so it plays as you read the rest of this essay. 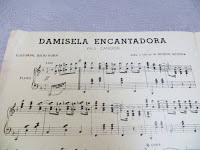 It was written in 1933 as one of the songs for the now-forgotten operetta Lola Cruz that Ernesto Lecuona composed. But this song was not forgotten. “Damisela Encantadora” became a vocal standard in Cuba and throughout Latin America and Spain, sung over the years by opera singers and vocalists like the Spaniard Placido Domingo, the Mexican Juan Arvizu, the Venezuelan Alfredo Sadel and of course, Esther Borjas, the Cuban soprano and TV personality. Even today, the song is periodically dusted off and covered by some singer in a Spanish-speaking country.

Benito and Mariana would have heard a recent cover of the song during their courtship in Camaguey. A popular band or vocalist would put out an album of standards and the single “Damisela Encantadora” would get radio play and be on everyone’s lips for months. It is a catchy, danceable tune and its saccharine lyrics perfect for those falling in love. Read them for yourself below. 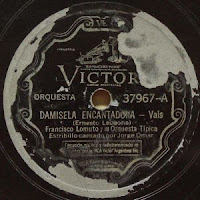 Damisela Encantadora – Vals
Francisco Lomuto y su Orchestra Tipica
Cuba’s closed economy means that I can’t get ahold of a recording from the time of their courtship. So instead, here is a recording from that era from Argentina by the Francisco Lomuto Orchestra with vocalist Jorge Omar that gives you a flavor of the interpretation of this song back then. The vocalist only sings the chorus in this recording. On YouTube you'll find many more versions, most in that affected style of singing that went away by the 1960s. (Good riddance.) 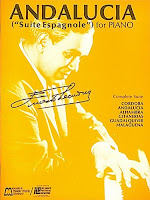 Ernesto Lecuona (1895–1963) was a very prolific Cuban composer and pianist of worldwide fame for both classical and popular music. Lecuona's work influenced the Latin American world in a similar way as his contemporary George Gershwin turned jazz into a classical form of music in the United States. Lecuona raised Cuban-styled Afro Caribbean music to classical status. His Andalucia Suite is perhaps his most well-known classical work and “Siboney” one of the most enduring of his popular songs. He recorded for Victor records, and many of his piano performances, including one of “Damisela Encantadora,” are available in the U.S. on the RCA Victor label.

For Mariana’s funeral Mass, we asked the pianist and cantor to sing “Damisela Encantadora” as the closing song, so she and those present would hear it one more time before she went to her rest. Despite the short notice they played and sang it wonderfully.