This article is a postscript to the “Our Very Rich Relations” article about Angela Rodriguez and her husband Federico Castellanos, who bred, showed and raced Arabian horses in the ’30s, ’40s and ’50s. His prized horse was named Charaff, purchased in 1948 in Ohio, which he showed throughout the Americas, and which was confiscated by the Cuban government along with his ranch in 1960.

My brother in Maryland found a 1966 Chicago Tribune article that describes how Federico managed to get his race horse back.  The article has no byline and was published on page 5 of the Sports Section on Monday, April 4, 1966 with the headline “Recall Flight of Arabian Stallion from Castro Cuba.”


The article reads as follows:

The sale of 40 Arabian show horses at the Dane county fairgrounds in Madison, Wis., next Saturday recalls a story which Ian Fleming might have used for a James Bond thriller. 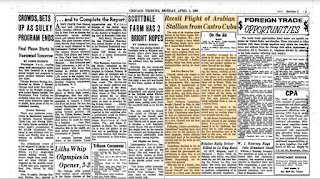 Six of the horses offered, from whose original stock was begun the thorobred race horse some 300 years ago, are the daughters of Charaff, a Raffles stallion which won three grand championships during its show days.

Got Five Horses Out
Charaff, which now stands at the Daalada Arabian Acres farm of Dr. David A. Hoffman in Germantown, Wis., became the object of considerable attention some six years ago when its owner sneaked it, another stallion, and three mares out from behind Fidel Castro’s sugar cane curtain.

Señor Federico Castellanos bought Charaff in Ohio in 1948 to head the stud on his farm in the province of Camaguey in Cuba. Castellanos soon found he had an international champion both in the show ring and as a sire. Charaff was the best Arabian in Cuba.

Following Castro’s revolution, Castellanos’ breeding farm was taken over by the agrarian reform program, whose officials destroyed most of the breeding records and let the farm go out of production.

Castellanos decided to try to get Charaff out of the country and asked the government for permission to show him at an international charity event in Miami. Surprisingly, his request was granted.

With the aid of a friend, José de la Torriente, Castellanos moved Charaff and his other horses to a farm near Havana and somehow arranged for a plane to fly them out. He chose three mares, one of which was in foal, and another stallion besides Charaff for the flight.

Just before sunrise one morning, the horses, walking on rubber-shod hooves, were loaded on the plane in the middle of a pasture and then successfully flown out to Miami. While the pilot was circling the airport it was discovered that the mare in foal was in labor. She was rushed off the plane as soon as it landed and dropped the foal only minutes after being unloaded from a van at a nearby farm.

Charaff was taken to the Miami show, where a capacity crowd gave an ovation when it was brought into the ring.

In 1964 Señor Castellanos died and left Charaff to the Arabian Horse Foundation, which leased it to Dr. Hoffman. Saturday 800 to 1,000 persons at the first production sale of its kind in this area, will be bidding for his daughters.