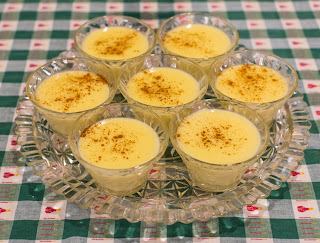 Mariana M. Prats made a delicious cinnamon-infused vanilla pudding that was nothing like the vanilla puddings you are used to. It is both a thinner and at the same time a richer-tasting custard. Eat with a spoon like a pudding, use it as the base for a fruit tart, or use instead of jelly in a jelly roll. Delicious!

It was her maternal grandmother’s recipe, handed down to her (and to her sisters) by her mother, Elia Rodríguez Casas and titled “My Mother’s Custard.” She never wrote it down but her sister Natalia did and that is where I got it.

The dulcero — the desert-maker — tradition in the Maryland Prats Clan comes from Mariana’s paternal line. The Martinez great-aunts, Mimí, Panchita and Natalia, sold their desserts commercially in Camaguey in the 1910s to make ends meet after Mariana’s grandfather died while her father was still in law school. But this recipe comes from the Rodriguez side of the family, Mariana's maternal side. That’s what makes it unique.

It’s easy to make. All you have to do is mix, heat, and stir.

In a mixing bowl, use some of the cold milk to fully dissolve the corn starch. Then add the rest of the milk, the sugar, egg yolks, and vanilla extract and mix with a spoon or whisk until fully combined. Transfer to a cold heavy-bottomed sauce pan, add the cinnamon stick, and set the burner to medium heat. Patiently and constantly stir the mixture with a flat-bottomed wooden spoon until the custard coats the spoon.

Mariana instructed and Natalia echoes: “stir the custard back and forth, not round-and-round” and “don’t hurry the custard or you’ll burn it.” I think the latter means to not start with a hot burner and to resist turning up the heat if it does not thicken fast enough for you. The stirring instruction, I've been told, is very very important.

When the custard thickens (coats the spoon), remove the cinnamon stick and fill seven to eight serving bowls, garnish with powdered cinnamon and set aside to cool. Mariana always refrigerated it and served it cold, but it is also delicious warm!

An alternative finish is to sprinkle each cup with sugar and then “iron” them just before serving. In the days of charcoal stoves in Camaguey a clothes iron was heated on the stove and the tip was held close to the  sugar to melt and caramelize it, like the top of a crème brûlée serving. Today your handy kitchen blow-torch will do the same job without fouling your electric clothes iron.