Sometime in 1962 or 1963 Dr. Benito H. Prats boarded a flight from Havana to Camaguey that was hijacked to the U.S. It never got there. The exact date is no longer known, but the story and its surprise ending is now family lore.

Once upon a time airline travelers could stroll from the ticket counter to the tarmac and up the stairs to their airplane without getting in line to be frisked by dour and suspicious security agents like what happens at all airports today. Then in the 1960s the hijacking of airliners by criminals who wanted to fly to another country to evade arrest became popular and by the end of the decade airport security checkpoints prior to boarding were de rigeur.

Hijackers were treated harshly when they landed — as they should. Even if there were no casualties the ordeal terrorized passengers and crew and endangered lives on board and on the ground. However, U.S. hijackers that successfully reached Cuba were treated as heroes and given asylum and plenty of press there, and, surprisingly, Cuban hijackers that reached the U.S. were likewise given asylum here and released without charge. This was a perfectly normal aspect of the cruel tit-for-tat dance that was the Cold War.

By 1962 the Cuban middle class was desperate to leave (the rich had already fled) and the authoritarian government of Cuba was equally desperate to save face. Why would anyone want to leave the utopia they had created and heavily promoted to the rest of the world?  So Cuba followed the Soviet Union’s lead and imposed exit controls on its citizens, and permission to leave the island was severely curtailed. Even if you could afford the ticket and had permission to enter another country, without an exit permit you could no longer board an international airplane, ship or ferry.

All airworthy private aircraft and seaworthy watercraft had been appropriated without compensation by the government and carefully accounted for, and the coastline and air space was heavily patrolled. To escape the prison that Cuba had become, the only choice left was to find a leaky boat, or lash together a raft, and set off at night to evade the Coast Guard and brave the dangerous and wide Straits of Florida. Many did and many died.

There was one other choice. Hijack a domestic flight and order the pilot to fly to the U.S.

Benito had flown to Havana earlier and was now on his way home. The trip may have been for a professional meeting as he was associated with a number of hospitals and clinics in Camaguey, or he could have needed to get to an embassy in his quest for visas or to a government agency for permission to take himself and the rest of his family out of the country. By this time his four older children were already in the U.S.

It was another gorgeous Caribbean day: beautiful blue skies with fluffy white clouds — perfect for flying.  The flight was probably Cubana de Aviación’s flight 482, the 342-mile two-hour nonstop flight to Camaguey that departed Havana at half past noon.  (Today this flight is just an hour by jet.)

Cubana had used 28 passenger American-built Douglas DC-3 twin-engine aircraft for their domestic flights since the 1950s. Seat configuration was two seats on each side of the aisle. There was plenty of leg room and recline pitch compared to today’s coach seats. But the U.S. embargo had made spare parts difficult to procure, so late in 1961 Cubana added two Soviet-built Ilyushin-14 twin engine airplanes to their domestic fleet. They had capacity, speed and range similar to the DC-3. Benito’s flight could have used one or the other. So for this story, because I cannot find a good photo of an Ilyushin-14 in Cubana livery, lets put him in a DC-3.

Benito said that the flight was half-full: maybe 12 to 15 passengers. Like they did back then all over the world, everyone was dressed for travel. Suits and ties and fedora hats on the men, smart dresses and pinned hats on the ladies. The overhead rack on airplanes of that era was just a narrow open rack designed to hold men’s hats and not much more. It made the cabin look just a tad less cramped. The ladies kept their hats on.

It was an uneventful takeoff and flight 482 quickly reached cruising altitude.  The Fasten Seat Belt sign and the No Smoking sign had just been turned off and the azafata — the flight attendant — began walking the aisle collecting drink orders. She returned with the drinks balanced on a tray, handing them out one by one. The airline was still attempting to maintain the service it was known for when it was a private concern 42% owned by Pan American Airways.

Later in the flight she passes out box lunches — a waxed pasteboard box with perhaps a couple of pieces of cold fried chicken, cheese and crackers, a small piece of fruit of some sort, and perhaps a slice of guava paste on a cracker.  For some reason, the passenger across the aisle from Benito did not touch his drink and refused lunch.

The flight attendant was collecting the empty boxes when the passenger across the aisle, a young man in a suit and tie, jumps up and pulls the pin of a hand grenade he was holding. He was sweating profusely and looking quite agitated.

“This plane is going to Cayo Hueso!” he shouted, waving the grenade with one hand and the pin with the other.  Cayo Hueso is the Spanish name for Key West.

The door to the cockpit was open — they usually were to improve circulation — and the crew of three — the captain, copilot and navigator — heard the commotion. The navigator steps out.

“Young man! Young man!  What are you carrying on about?”

“I’m commandeering this airplane and you are taking me to Key West!”

“We can’t!” says the navigator.

“Why not?  Are you the pilot?” asks the hijacker.

“I’m the navigator. The captain is flying the plane.”

By then the copilot is in the narrow aisle of the cabin behind the navigator.  Benito’s eyes, and all the other eyes in the cabin, are riveted to the hijacker’s left hand and more particularly the fingers that hold the grenade’s safety lever tightly against the grenade. He’s got a tight grip, but his arm is spastic, waving the grenade every which way. In his right hand is the pin he pulled, the only path to salvation.

If he lets go of the spring-loaded lever, even if just for a second, the grenade is going to blow. You can’t squeeze it back closed to stop the explosion. The delay element lights when the lever is released and when the burn reaches the detonator the explosion will occur. If he lets go, no heroic quick action is going to save the day because there is no quick way to throw it out of the aircraft.

“We can’t fly to Key West, “ says the copilot. “We only have enough fuel to get to Camaguey.”

“We’re almost halfway to Camaguey and we have been flying further away from Key West. We spent a lot of fuel taking off and reaching this altitude. We can’t get to Key West with the fuel we have.”

The pilot, in radio contact with the ground, had quietly announced a mayday and began to slowly and carefully turn the eastbound airplane around and return to Havana, hoping the hijacker would not notice.

The hijacker noticed the change in the sunlight entering through the windows and screamed, “Where are you going now!  We’re changing course! I need to get to the U.S. or die.  I’m going to release this lever!”

“No! no! Don’t worry! We’re returning to Havana so we can refuel and get you to Key West. Stay calm!”

The hijacker is anything but calm. He started hyperventilating.

Benito stands up — there was enough room to stand up straight at the aisle seat — and says to the hijacker, “I’m a doctor, and you, young man, you are suffering from a panic attack. You don’t want to kill us all, do you?  Let me give you something to calm you so you can hold that grenade safely.”

Benito went everywhere with his doctor’s bag, a small black hard-leather satchel with his initials BHP in gold leaf above the latch. He rummaged around inside and came up with small white glass bottle with a yellow label: a sample bottle of meprobamate. He unscrewed the lid, shook out a tablet, and offered it to the hijacker.

Launched in 1955 by Wallace Laboratories, Miltown (the generic name was meprobamate) was the first blockbuster psychotropic drug in U.S. (and therefore in Cuban) history. It was the Valium of its day. Celebrities from Hollywood to Manhattan were popping it to calm their nerves. And the characters they played on screen and stage took it, typically chased down with whiskey, to calm their hysterics. Pharmaceutical salesmen handed out samples as they made their rounds of doctors’ offices, and Benito had a sample bottle in his bag.

“That’s going to knock me out! I’m not taking it!” cried the hijacker.

So Benito popped the pill in his own mouth and swallowed it with an audible gulp.

The situation remained tense, the copilot and navigator continued negotiations, and the flight landed back in Havana and taxied to a distant part of the airport well away from the terminal and shut down its engines. Soldiers surrounded the airplane, guns drawn. It did not look good for the hijacker.

There is another thing to note about airplanes of that era. If they were not moving there was no air circulating in the cabin. The hijacker refused to allow the door to be opened and the temperature inside the aircraft was becoming unbearable.

The hijacker had been holding the grenade for more than an hour now, gripping it with all his might. His hands were sweaty. It was evident he would not be able to keep hold of it for much longer.  And the airplane was surrounded by soldiers. 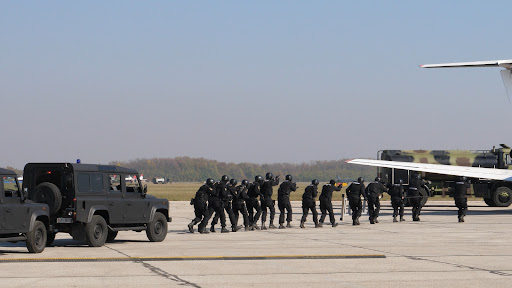 Suddenly, without a word, the hijacker looked into Benito’s eyes and reached across the aisle with the grenade. Benito carefully took it in both hands and worked his fingers around over the lever. The hijacker offered him the pin. Benito took the pin and carefully put it back in the grenade, locking the lever. He then gingerly put the grenade down gently on his seat and let it go.

The hijacker was slumped in his seat, sobbing, as the crew opened the door and soldiers entered and roughly took the man away.

Passengers and crew were bused to the terminal where they were greeted by Fidel Castro, the supreme Cuban leader himself. He shook everyone’s hand, declaring them all brave heroes, patriots, and fighters for the revolution. Ice water and saltines were offered. The airplane was fueled, repositioned at the terminal, and passengers and the same crew boarded to restart their interrupted voyage to Camaguey. I wonder if they were served supper.

What a story he got to tell Mariana when he finally got home!  He checked radio and TV newscasts that evening and the newspaper the next day for news on the hijacking.

Not a word! And no words of congratulations from Communist Party and government functionaries were forthcoming. After all, who in the world would be so desperate to leave the sun-drenched egalitarian utopia that the second revolution had brought to Cuba.

Want to read a first-hand account of how daily life was for Cubans in those years?  Check out a Belgian priest’s wry account of what he saw and experienced in Camaguey in the 1960s:  A Priest in Red Cuba